COVID-19 (Coronavirus) may impact your travel plans. Wherever you're going, you'll find the latest advice here.

Europe is home to many of the world’s most gorgeous castles and palaces. But which ones are just as stunning on the inside? Let Skyscanner be your guide as you venture behind the walls of 10 royal residences that will dazzle your senses.

As the inspiration for Disneyland’s Sleeping Beauty Castle, Neuschwanstein has a lot to live up to. Luckily, its richly romantic interior more than matches its fairytale exterior. With lavish rooms paying homage to medieval legends, German folklore, and Wagner’s operas, this Bavarian castle is sure to take your breath away. Bask in the beauty of the sublime Throne Hall, which features vibrant gold-and-blue hues, mosaics and mural paintings. But the real surprise here is the Grotto – a softly illuminated cave with artificial stalactites and a small lake. As you explore this enchanting spot, you just might feel like you’ve been transported to a fantasy realm. 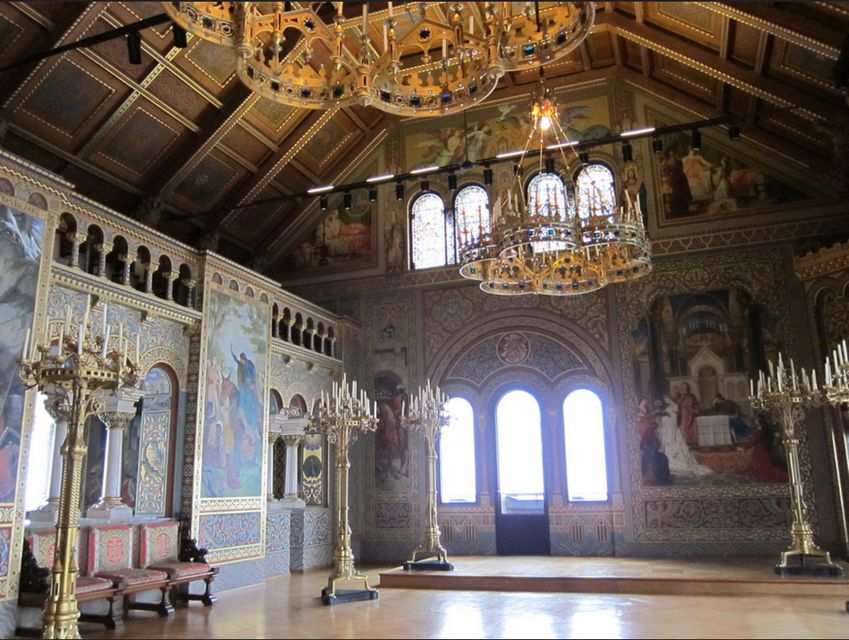 Windsor Castle is fit for a queen – literally, since it’s one of Queen Elizabeth’s favourite weekend homes. Built by William the Conqueror in the 11th century, Windsor is the oldest inhabited castle in the world. You can sense its illustrious history as you walk through the luxurious State Apartments, which are adorned with gilded ceilings, royal portraits and exquisite chandeliers. One of the main attractions is St. George’s Hall, a magnificent 55-metre long room that is still used for state banquets. Whatever you do, don’t miss Queen Mary’s Dolls’ House. This gorgeous miniature replica has astounding features – including running water, electricity, and a fully stocked wine cellar! With London less than an hour away, there’s no excuse not to visit this spectacular castle.

Perched on a hilltop in Granada, the Alhambra is one of the most exquisite examples of Moorish architecture in Spain. Dating all the way back to the 9th century, this palace and fortress complex features a stunning symphony of archways, gardens and courtyards. With rich arabesque patterns and mosaics adorning the interior, the Alhambra is truly a feast for the senses. Don’t leave without exploring the majestic Court of the Lions, with its alabaster fountain supported by 12 lion sculptures. Another must-see gem is the Hall of the Abencerrajes, which boasts a breathtakingly beautiful dome shaped like an eight-point star. We dare you not to be awestruck.

Marvel at the Moorish-inspired design of the Alhambra. Photo credit: shutterlust.de / Flickr

Nestled in the Carpathian Mountains, this Romanian royal haunt is famous for its lavishly furnished interior. With stained glass windows, ornate wood carvings and rich tapestries galore, Peleş Castle is a treasure trove of wonders. Art lovers can gawk at all the magnificent paintings on display, while history buffs will delight in the Grand Armory’s impressive collection of weaponry. Each chamber is decorated with a different theme – from the silk-draped decadence of the Turkish Parlour to the Michelangelo-inspired Florentine Room. With so much beauty to feast your eyes on, you’ll never want to leave.

At Peles Castle, each room is more stunning than the last. Photo credit: Dennis Jarvis / Flickr

This world-famous palace practically invented the word “decadence”, so it needs no introduction. Astonishingly, Versailles manages to live up to all the hype – especially when you enter the legendary Hall of Mirrors. This awe-inspiring gallery, with its gilded sculptures, dazzling chandeliers and 357 mirrors, simply has no equal. The sheer magnificence of the Royal Opera is enough to make theatre buffs weep; while the sumptuous Queen’s Chamber is a must for any Marie-Antoinette fan. When it comes to jaw-dropping opulence, Versailles still reigns supreme.

Nothing can top the spectacular Hall of Mirrors at Versailles. Photo credit: Tom Bricker / Flickr

Occupying an idyllic spot by the Gulf of Trieste, Miramare Castle offers a mesmerising glimpse of 19th century royal life. All the original furnishings remain intact – from the light-blue silk tapestries hanging in the Archduchess’ rooms to the giant globe in the library. And speaking of the library, it’s every book nerd’s dream: just picture row upon row of precious volumes lining the walls, and marble busts of Homer and Shakespeare. If you’re nautically inclined, head over to Archduke Maximilian’s bedroom, which is fashioned to look like the cabin of a warship. It doesn’t get any cooler than that.

As the Viennese summer residence of the powerful Habsburg dynasty, Schönbrunn was one of the most important palaces in Europe. Given its enduring role in hosting political and royal figures, Schönbrunn certainly looks the part – both inside and out. Prepare to swoon over the white-and-gold splendour of the Great Gallery, with its crystal mirrors, massive chandeliers, and stunning ceiling frescoes. Another highlight is the Vieux-Laque Room, which is entirely decorated in black lacquer panels from China. For a special treat, book a private group tour of the Bergl Rooms: these delightful chambers are painted with lush, exotic landscapes that defy imagination.

No one does opulence quite like the Russian tsars, and the sheer splendour of Catherine Palace is a fitting legacy. Built at the height of imperial extravagance, this summer palace on the outskirts of St. Petersburg boasts sumptuous rooms that are laden with gold. The most spectacular of these is the legendary Amber Room, which was once considered an Eighth Wonder of the World. As you marvel at this intricate masterpiece decorated with amber, gold and jewel-encrusted panels, all this grandeur will make you feel like a Romanov.

At Catherine Palace, everything that glitters is gold. Photo credit: Larry Koester / Flickr

Prague Castle is the largest ancient castle in the world, so you’ll want to set aside a few hours for some serious exploring. But where to begin? First, pay a visit to the gorgeously Gothic St. Vitus Cathedral, which still contains the tombs of many Holy Roman Emperors. Next, head over to the Old Royal Palace, where you can marvel at Vladislav Hall’s beautiful vaulted ceiling. There’s also a terrace upstairs boasting panoramic views of Prague. Last but not least, make your way to Lobkowicz Palace. This hidden gem hosts a wonderful collection of paintings and rare manuscripts – including original musical scores by Beethoven and Mozart. Now that’s a day well spent.

If you want to delve into Denmark’s rich past, there’s no better place to start than Frederiksborg Castle. Located less than 40 km away from Copenhagen, this resplendent royal residence has just as much to offer as its more famous peers. The Great Hall is particularly grandiose, with its gilded portraits and its colourful, ornately carved ceiling. Don’t miss the Castle Chapel, which features a stunning altarpiece made from gold, ebony and silver. The chapel also houses one of Frederiksborg’s greatest treasures: a Compenius organ that dates all the way back to 1610. And yes, it still works perfectly.

Ready to start your castle-hopping adventure in Europe? Head on to Skyscanner today and check out the best flight, hotel and car hire deals! For easy browsing and booking on the go, check out our mobile apps here too.

Originally published August 2015 and updated on 07 November 2016. Any prices are lowest estimated prices only at the time of publication and are subject to change and/or availability.

Well we'd love it if you left us a review.
(It only takes 30 seconds, we promise!)